9. What’s wrong with the girl?

A. On the left of the office building.

B. On the right of the office building.

C. In front of the office building.

12. What does the woman think of the man？

A. Interesting.  B. Friendly.C. Kind.

13.Why did the woman come back from London?

A. She came back on business.

B. Life was hard in London.

C. She came back to take care of her parents.

19. Volunteers   B. make an English study plan to improve his English

However, there are growing facts that fast food is one of the worst parts of modern life.And studies have shown that burgers and fried chicken, which we enjoy so much, can cause a lot of health problems.

In spite of (尽管)this, why are fast food restaurants so attractive(吸引人的)? The first and most important reason is that their service is fast. Their staff(员工) are friendly and very smart-looking in their clean and bright uniforms(制服). Moreover, most fast food restaurants are near places that people always pass by. It is so easy to grab a burger and eat on the way to work.

Fast food is often so conveniently packed(包装方便) that it will not cause a mess even if you stand and eat it. Fast food restaurants are also very clean. A lot of clever ads(广告) have made them the coolest places in town, but none of them has ever told and will never tell you that too much fast food is not good for your health.

Such attractive places are selling junk food! Isn’t it a pity? Is there a way to change the fast food restaurants into special places where you get the best possible, healthy and fresh food?

As people realize the health problems that fast food causes, it is quite likely that fast food restaurants may go out of date. It may happen sooner or later.

Therefore, instead of resisting(抵制) fast food restaurants, a better idea may be to persuade(说服)them to change their menu! Fast food restaurants can be places to go to when you want to eat something that will be good for your body. If they could combine(结合) healthy food with their speed of service, delicious tastes and comfortable feelings, that will be the next best thing on the earth for the human beings!

28. Which word can replace the word “grab” in Paragraph 3?

A. move suddenly B. get quickly

A. show you all the facts B. don’t tell you the whole truth

A. making the service of fast food faster  B. resisting fast food restaurants 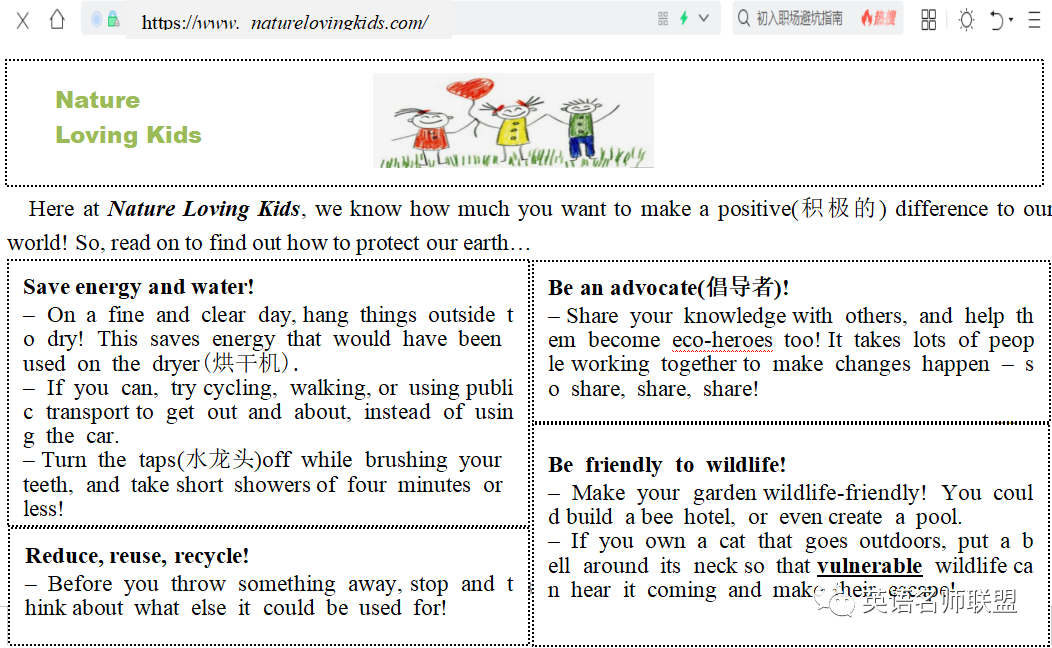 A. save energy and water B. be an advocate

C. reduce, reuse and recycleD. be friendly to wildlife

33. What does the underlined word “vulnerable” mean in Chinese?

A. help the kids learn English     B. help people learn more about kids

We see humans all around us. But when was the first human seen? Early humans did not leave behind any written records. However, they left behind many paintings on the walls of the caves(洞穴) where they lived. These paintings tell about their life, and we know these early humans walked on four limbs(四肢) like apes（猿）. Also, they did not live at one place but moved from place to place in search of food and water.

Without any tools, early humans used stones, bones of animals, and sharp pieces of wood to dig, hunt and cut their food. They also used these to protect themselves from animals. Since stones were used to make tools, this age was called Stone Age.

With time going, tools made of bones and stones were replaced with metal(金属的) oneswhich were stronger, sharper, and long-lasting. Metals were also used for farming and makingknives. Copper(铜) was the first metal to be used.

The first fire that early humans noticed was natural fire caused by lightning(闪电). With fire, early humans could now light up dark caves. They could keep themselves warm during cold weather and cook meat. Also the fire could drive animals away.

Early humans noticed new trees growing from the seeds(种子) that fell to the ground from the fruits. This gave them the idea that they could make their own food by planting seeds, which led to farming. With the beginning of farming, early humans began to settle down(定居). They moved out of the caves and lived on farms and near their fields together, then the first villages came up.

Raising animals was a big event in human history that changed the life of early humans. The wild dogs were probably the first animal to be raised. As time went, goats, sheep, cows, donkeys, and horses were kept, too. This led to herding(畜牧业). Milk, meat and wool came from these animals.

A. when the first human appeared  B. how they walked

A. find more caves to live in  B. protect themselves from animals

40. Which statement is right according to the passage?

A. The first tools were made of copper.

B. The first fire noticed by early humans was caused by lightning.

C. The first villages came up before the farming appeared.

D. The first animal to be raised was sheep.

Although it’s said Van Gogh(梵高)(1853-1890) sold only one painting during his lifetime, different theories(理论) exist(存在).

It is true that The Red Vineyard is the only painting sold during Van Gogh’s lifetime, and that was officially(官方地)recorded and accepted by the art world. It’s recorded that Van Gogh started painting at 27, and died at 37. His famous paintings were produced after he went to France in 1888, only two years before he died. So it would be clear that he did not sell many.

Also, according to the Van Gogh Museum website, Van Gogh actually sold a number of paintings for living during his lifetime. His first money came from his uncle, who was an art dealer(经销商). In order to help Van Gogh’s career(事业), he ordered 19 paintings. And Van Gogh himself would often trade his paintings for food or art supplies(美术用品)when he was younger.

Van Gogh died in July of 1890. His brother was a wise dealer and saved lots of paintings by Van Gogh. His greatest wish was to make the works more widely known and make much money. Sadly he himself died just six months later. He left a large collection of art to his wife, who “sold some of Van Gogh’s works, lent as many as she could to exhibitions, and published(出版) many of Van Gogh’s letters to his brother. Without her, Van Gogh would never have become as famous as he is today.” After her death, her son founded the Van Gogh Museum.

A. the official records B. the Van Gogh Museum website

A. Van Gogh’s paintings were popular. B. Van Gogh was poor then.

43. Which statement is right according to the passage?

A. Van Gogh’s brother got rich by selling his paintings.

B. Van Gogh wrote many letters to his brother.

44. Who is the most important person to make Van Gogh so famous?

A. Van Gogh himself.  B. Van Gogh’s brother.

A. whether Van Gogh sold only one painting in his life

B. how Van Gogh became famous

D. the family of Van Gogh

Sometimes, Mr. Vera will see a bicycle he fixed. “Every old bike is shining with good memories of love,” he said with his eyes shining.

A. An idea came to his mind

B. It was a surprise to ride by myself

C. That makes him think of his childhood

D. In January he sent another message around

E. All his neighbors are thankful to him for doing this

F. As time goes, bikes are disappearing in people’s life

Row Boats in the Park

Somehow, checking this one off the list always meant that many things had to be just right: the right weather, a free day, and childcare-free.

“I have to think it over,” I replied.

That’s the perfect summary of who she is. Do you agree?

Self-love is the most important if you want to find out your full potentials(潜质) on earth. Accepting who you are makes you feel that you are good enough.

You are good enough does not mean you are perfect. Nobody is perfect. Being good enough means you accept who you are and believe in yourself. The truth is, opinions of other people make it hard for you to find the good part of yourself. So, 73 you need to believe in yourself instead of caring what people think of you. Be sure you are doing it for yourself, notfor someone else. Just make efforts to improve yourself and then you are sure to become the best you can be, or a better version(版本) of yourself.

What should we do when someone is stuck(深陷) in the ocean of not feeling good enough? Here are some suggestions to help. First, be a good listener. Listening to someone will not only make them feel they are worthy but also make you know better what they are going through. Then you will get the idea of how to cheer them. Besides, always encourage others. When people talk about their dreams, tell them it’s possible that all dreams can come true. So, loving others in this way will make them feel good enough.

72. Translate the underlined sentence into Chinese.

73. What should you do to make yourself a better version?

75. Give a proper title to the passage.

Life skills are necessary for us. What life skills should we teenagers develop? And how? Here is my opinion.

All in all, if we try our best to improve these life skills, we will lead a happier, and healthier life.

73. (Just) Make efforts to improve yourself.

75. How/Ways/Suggestions/Advice/Tips to make yourself and others feel good enough

Learning life skills is necessary for us, because what we are depends on what we learn. What kind of life skills should we teenagers learn? Here is my opinion.

First, we should try our best to keep healthy. It’s a good idea to keep a balanced diet and take daily exercise. And be happy every day.

Second, working with others is important. Sometimes, we need to work as a team. When we communicate with others, try to understand them.

Third, solve problems in different ways. We are able to find out the problem, find solutions alone or with others and then solve it.

Besides, learn to manage time. We can make a list of things to do every morning. Get up early and never be late for school.

Finally, learn some basic skills, such as cooking. We can ask family for help or search the Internet. Then practice making some dishes.

All in all, if we try our best to learn these life skills, we will lead a better, happier, and healthier life.